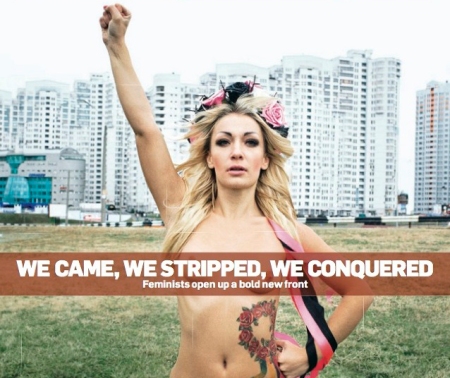 What’s a girl got to do to get noticed around here?

Whether it’s nip slips at the Super Bowl, or boobies for beads at Mardi Gras, the obvious answer to this age-old question remains: show us your tits. Yes sir, boobs turn heads—which may make FEMEN, a Ukrainian-born feminist movement that has turned topless protest into a performance art, the best idea ever.

“There is an ideology behind protesting topless, but we quickly realised that if we took our tops off and screamed loudly it was a good way to get attention,” says Alexandra Shevchenko, one of FEMEN’s founders. “It works. Of course, people talk about our nakedness, but they are also listening to our message.”

The FEMEN movement was created in 2008 to raise awareness for women’s rights in the Ukraine, particularly to combat prostitution and sex trafficking. Since then, they’ve broadened their scope, opening an office (and a topless protest boot camp) in Paris, and participating in worldwide demonstrations for women’s and gay rights. If their Vimeo page is any indicator, FEMEN’s modus operandi is: show up, get naked, and scream blue murder when the mortified cops show up. And bring your chainsaw.

Read more at The Other Press.

I’m doing a series on FEMEN, hopefully culminating in a trip to their topless training bootcamp in Paris, if I can convince VICE magazine to send me. Fingers crossed!

There's a Finn in my Canadiana
House of Anansi Press