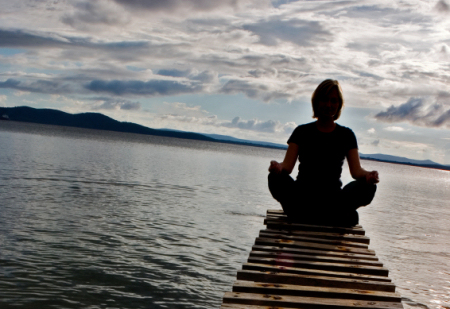 People often ask me what the hell the deal is with this ten-day silent meditation thing I do in January/ February. And if they don’t ask, I often bring it up- because I like to toot my own horn.

Like most smug assholes who have found something that makes them happy, I want everyone to follow my lead to the promised land! You don’t have to go to a retreat to meditate, but for those who appreciate the baptism-by-fire approach to spirituality, this is it. Needless to say, the experience is not the same for everyone. But for most people, it’s pretty intense.

It’s hard.
It’s hard to be quiet for 10 days. It’s hard to sit still for an hour at a time. It’s hard to keep my eyes closed for the better part of the day. Sometimes at the end of a sitting, my eyes are crusted shut. As I slowly quiet my mind and become more aware of my body, I become exponentially more aware of how uncomfortable I am. My back. My hips. I’m bloated. Get off my lawn. We’re packed eight to a room, and the girl across from me snores at night. I can hear it through my earplugs. I want to stab her.

After a few screamingly painful days, heightened self-awareness doesn’t really seem like such a great idea after all. At that point, a noob meditator may quit, or she may make a choice to buy into this marathon of pain, and believe that things will get better as she learns the technique. Or, if you’re like me, you’re just too intimidated by the nuns to tell them you want to get the fuck out of there. And you have no money or cell phone, since you foolishly handed everything over to them on day one, so staying seems like the path of least resistance.

If you are one of those people who fear losing control and screaming in church, or laughing uncontrollably at a funeral, you will have a teeny, tiny idea of what we go through in those ten days. We are supposed to be QUIET all the time. No speaking. No heavy footsteps. No closing the door or turning on/off the tap too loudly. (The latter command was issued on a little sign next to the bathroom tap, making me laugh the first time I saw it- then clap a hand over my mouth in sheer. fucking. terror.) Did I mention the nuns? They’re scary. Unsmiling, they communicate in intense eye contact and swift, economical gestures. Not what I expected from Buddhists. But then, the retreat is serious business.

During an evening sitting, a woman to the right of me makes some kind of strange gurgling noise, and I dare to open my eyes long enough to catch a single, violent convulsion. It looks like a one-step exorcism. She bursts into tears-full on shrieking sobs-and several nuns rush to help her out of the hall. I had noticed her on the orientation day because she looked like a famous writer: mid-fifties, swishing around in a purple wool kaftan and shamelessly flouting the no jewellery policy. I had wondered if she was there to do research, or maybe just decompress after a big project. She and her equally fabulous friend are gone the next morning. I’m sure the nuns didn’t want to let them go. S.N. Goenka, the current head teacher of Vipassana, says leaving half way through a retreat is like walking out with an open wound. And I can relate, since my body feels like it’s been through a wood chipper.

Around day five, I stop paying attention to my body, because I’m going crazy. Now it’s almost impossible to be quiet, because my mind is bitchslapping me over and over and over. And when you shut your mouth up for 10 days, your mind will have a few things to offer up. Trust. Mine is apparently dominated by an insane 5-year-old. The anger, the tears, it all comes out, and somehow I try to make it come out QUIETLY. Memories present themselves and I’m not sure if they belong to me, or the other people in the room. During a morning sitting, I have a lengthy vision of a black and white Bollywood film, grainy and flickery, like I’m watching it on an old projector. Oh  buddha. Tinfoil hat time.

And the emotions. It’s awful and kind of hilarious to be weeping uncontrollably through my lunch, but it’s my last meal of the day and dammit, I am going to EAT THIS MEAL NO MATTER WHAT IT TAKES, so every fibre of my being is devoted to bawling as QUIETLY as humanly possible. Of course, this is an absurd exercise, because there are people seated inches away from me on either side, and they would have to be deaf and blind to not know what is happening. But this is what I do, and I hope people aren’t too annoyed by my blubbering. It’s probably just as well we can’t converse, because I would be obnoxious.

And then there are other days, or moments at least, where I feel so far away from this messy vulnerability. When I don’t want to leave the meditation hall to go to lunch, because a weird calm has settled in my shoulders and opened up a yoga studio in my chest. Awareness becomes so saturated that I lose myself-I’m doing it!-and aww fuck I got too excited and now it’s gone again. But I had it for a second. It felt like hope, and as a modern-woman-of-the-world, I don’t spend a lot of time being hopeful. And that realization comes as a bit of a shock, annnnnnd I’m bawling again.

At the end of the retreat, other participants-people I barely know-approach me with wide compassion-filled eyes, and say things like: “I don’t know what you were crying about at lunch that day, but I wanted so badly to hug you and tell you that you’re not alone.” And then I cry again, because I had forgotten that I wasn’t alone, and it feels so good to be reminded. But that’s not all. While making conversation with the Indian woman who had been in the bunk to my left, she tells me she had been a movie star in India in the fifties.

“Old movies, black and white,” she says. “You wouldn’t have seen any.”